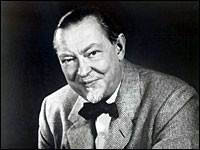 Howard Hanson (1896–1981): Composer, born in Wahoo, Nebraska, USA. He was awarded the American Prix de Rome in 1921, and after three years' study in Italy became director of the Eastman School of Music in Rochester, NY, a post he held until 1964. Under his leadership, the School became one of the most important centres of American musical life. His compositions, firmly in the tradition of 19th-c Romanticism, include an opera, The Merry Mount, and seven symphonies (www.biography.com).

To what extent, if any, should the quality of a work of art be judged by its originality?

The answer to this question is far from obvious. Yet in the course of the century-long reign of modernism in the arts, it came to be taken for granted that to be innovative was desirable in and of itself. Despite the fact that every great artist in every medium has derived innumerable aspects of his style and technique from the example of his predecessors, the word "derivative" became one of the most commonly employed terms of abuse in the critical lexicon.

Even after the collapse of the avant-garde monopoly, many critics have continued to employ the now-discredited rhetoric of late modernism--in particular, music critics who object to the growing popularity of the kind of tonal music they contemptuously dismiss as "neoromantic." For them, any music written after World War I, be it by Puccini and Rachmaninoff or by such present-day "new tonalists" as Lowell Liebermann and Paul Moravec, is unacceptable if it makes use of expressive devices derived from the composers of the 19th century. ...

Among those American composers who suffered most from the postwar intolerance of the avant-garde establishment were Samuel Barber, Paul Creston, Nicolas Flagello, Vittorio Giannini, Howard Hanson, and the Swiss émigré composer Ernest Bloch, who spent most of his adult life in the U.S. According to [author Walter] Simmons, these men ranked among "the most conservative of the [American] traditionalists," and their insistence on embracing "many of the stylistic features of late-19th-century music" made them anathema to critics who refused to believe that such an approach could yield artistically valid results at mid-century. Yet Simmons believes their best work to have been comparable in quality to that of such European contemporaries as Arthur Honegger, Sergei Prokofiev, Dmitri Shostakovich, Ralph Vaughan Williams, and William Walton, and he defines the nature of their achievement in unequivocal terms:

Each composer's body of work is characterized by an overall seriousness of purpose reflected in works of ambitious scope that attempt to address the fundamental existential and spiritual concerns of humanity. ...

Outside of the introduction, the most valuable parts of Voices in the Wilderness are the chapters devoted to Howard Hanson and Paul Creston, both of whom are prime candidates for revival, albeit to different degrees and for differing reasons. 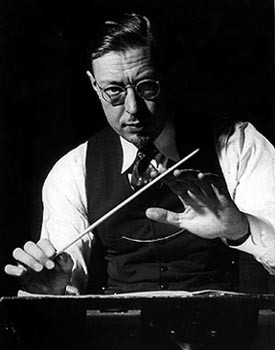 Launch the media gallery 2 player
Indeed, Hanson (1896-1981) never quite disappeared from the American musical scene, and for a time he was almost as well known as Aaron Copland or Virgil Thomson. Like them, too, he was more than merely a composer. Hanson ran the Eastman School of Music in Rochester, New York from 1924 to 1964, and conducted the Eastman-Rochester Orchestra in dozens of recordings of his own music and that of many other American composers. His Second Symphony ("Romantic," 1930) was a genuine popular success (Arturo Toscanini performed it with the NBC Symphony) and is still played on occasion by American orchestras, while his only opera, Merry Mount, was produced in 1934 by the Metropolitan Opera, though it failed to be taken up elsewhere. Gerard Schwarz recorded most of his orchestral scores with the Seattle Symphony in the 80's, and these recordings led to a resurgence of interest in his music that continues on a limited basis to this day.

Hanson's "Romantic" Symphony offers a near-ideal occasion for a consideration of the relative importance of innovation and individuality in art. A tuneful, expansive exercise in traditional romanticism, couched in an idiom conservative even by the prevailing standards of 1930, it contains no musical devices that would have sounded out of place in a symphony written a quarter-century earlier. Yet it is not "derivative," at least not in the sense of sounding like someone else's music, nor will listeners familiar with later works by Hanson have any trouble spotting his distinctive stylistic fingerprints. Save for an occasional fleeting reminiscence of Sibelius, the "Romantic" Symphony is a genuinely individual statement, one whose implications Hanson himself summed up neatly at the time of its premiere:

"The symphony represents for me my escape from the rather bitter type of modern musical realism which occupies so large a place in contemporary thought. Much contemporary music seems to me to be showing a tendency to become entirely too cerebral. … I have, therefore, aimed in this symphony to create a work that was young in spirit, lyrical and romantic in temperament, and simple and direct in expression." ...

Not until later in life did Hanson abandon the traditional Austro-German symphonic framework that he so clearly found unsympathetic. Once he did so, he began to produce more loosely structured pieces whose freer form was better suited to their romantic content. The strongest of these works, in particular the Fifth Symphony ("Sinfonia Sacra") of 1954, are both structurally convincing and powerfully expressive, and there is no good reason why they should not be more widely heard today. ...