With temperatures in the low 50’s, and relatively gentle winds, the conditions were nearly ideal for some fast times at the State Cross Country Championships held in Kearney on Friday, October 25.

The Class C girls’ race was the first of the day, and the Lady Warriors did not disappoint! Senior Zoe Christenson continued her excellence on the course, and ran an outstanding race, earning her first ever state medal with a 5th place finish, and All-State honors!

Marke Zeleny was the next to cross the finish line, setting a new personal best of 22:29, and a 69th place finish. Next in was Hannah Jorgensen running a season best performance of 22:55.8, and Megan Robinson completing the scorers, running 23:28, good enough for 86th place. Also running for the Lady Warriors were Esmeralda Perez (87th), and Samantha Sutton (94th), who both ran personal bests to finish the season. For their efforts, the girls earned a 10th place finish.

“I couldn’t be more proud of Zoe and the entire girls’ team,” commented Head Coach Karla Curran. “They worked hard, and with Zoe’s leadership ended up as one of the top 10 teams in Class C.”

The boys’ team ran an hour later, and were also led by another senior, Grant Crockett. Crockett completed his senior career with a 24th place finish and a time of 17:42.3.

Josh Graber followed close behind, and ran 17:42.8, and a 25th place finish. Michael Robinson was next in for the Warriors, running 18:49.2, and teammate Garrett Grandgenett squeaked in just behind Robinson, running 18:50.5. Senior Jerstan Zeleny (79th), and Carson Reynolds (84th) also ran for the Warriors. The boys’ team finished 7th in the team standings.

“I told the boys going in if we could finish in the top six in the team standings, we would have a good day,” replied Karla Curran. “We finished 7th, so we were very close to that goal.”

It has been four long years since both Wahoo Cross Country squads have made it to the State Meet in Kearney, but on Thursday, October 17, the drought ended!

Both teams qualified for the State Meet to be held in Kearney this Friday, October 25. The C-1 District meet was hosted by Boys Town, and the girls took the third and final qualifying spot, while the gentlemen grabbed the runner-up position, finishing behind only D.C. West.

The girls were once again led by senior Zoe Christenson, who claimed the second place medal with a time of 20:16. Next in for the Warriors were freshmen Marke Zeleny and Megan Robinson, who both ran well, finishing 19th and 22 respectively. Hannah Jorgensen closed out the Wahoo scorers with a time of 23:32, and a 25th place finish. Esmeralda Perez 30th and Samantha Sutton 40th completed the Warrior team.

The boys were led by another senior, Grant Crockett, who placed third with a time of 17:32. Josh Graber was next in for the Warriors, finishing 8th, and just cracking the 18 minute barrier. Sophomores Michael Robinson (20th) and Carson Reynolds (26th) ran extremely well, and helped propel the team to its runner-up position. Jerstan Zeleny and Garrett Grandgenett finalized the Wahoo team, squeaking into the top thirty in 28th and 29th, respectively.

“I can’t say enough about how hard these kids fought today to make it to the State Meet,” commented Coach Karla Curran. “They knew going in who they had to beat, and they went out there and did it! I couldn’t be more proud!”

It was a day of personal bests and new course records as seniors Zoe Christenson and Grant Crockett took to the course on Wednesday, October 9, for the Capitol Conference Cross Country Meet hosted by Wahoo High School.

The meet was moved up a day due to impending bad weather; however, that didn’t seem to rattle Christenson, as she ran a personal best time of 20:06, outdistancing her competitors by sixteen seconds, and setting a new course record in the process.

Next across the line for the Lady Warriors were freshman Megan Robinson (13th) and Marke Zeleny (17th), who both had record setting days of 22:25, and 22:31, respectively. Hannah Jorgensen (21st), Esmeralda Perez (27th), and Samantha Sutton (32nd) also ran for the Warriors. The girls’ team finished in fourth place.

“It was definitely a good day for most of our girls,” commented Coach Karla Curran, “and Zoe continues to impress with another outstanding performance.”

The boys’ team was up next, and once again, Crockett led the way. In a hard-fought battle for most of the race, Crockett pulled away for the win, with a personal best time of 17:11.

Freshman Garrett Grandgenett ran an outstanding race running 18:28, improving his best time by 32 seconds. Following close behind were Michael Robinson in 18:36, and Carson Reynolds in 18:51. Completing the varsity squad were Jerstan Zeleny (27th) and Josh Graber (44th). The Wahoo Harriers placed third in the team standings.

“Grant ran a very smart race today, and beat some very strong runners,” stated Curran “We will need all of our boys to run at their best, if we want to have a chance at qualifying for State next week.”

With temperatures in the 60’s, the weather was perfect for some outstanding performances on Thursday as the Warriors headed into the Lincoln Lutheran XC Invite at Pioneers Park. The Wahoo Harriers did not disappoint!

The girls began the day on a positive note, when senior Zoe Christenson, once again, came away with the championship. Zoe outdistanced her competition by nearly a minute, finishing in 21:12. She took the lead from the start, and never looked back.

Hannah Jorgensen was the next Warrior to finish, running 23:37, good enough for a 14th place finish. Marke Zeleny also medaled for her team in a time of 23:40, and a 15th place finish. Megan Robinson was close behind, finishing just out of medal contention in 16th place.

Other Warriors to compete on the varsity squad were Esmeralda Perez and KaDee Johnson, who finished 26th and 31st, respectively.

For their efforts, the girls’ squad finished in second place.

“I am happy with the way the girls competed today,” commented Coach Karla Curran, “they worked hard the entire race.”

Next up for the day was the boys’ squad. Senior Grant Crockett led the way, snatching the top spot with a time of 17:58. Josh Graber was next to cross for the Warriors, running 18:36 for third. Michael Robinson (10th) and Carson Reynolds (12th) completed the Warrior scorers, and freshman Garrett Grandgenett squeaked into medal contention with his 15th place finish and a time of 19:32.

Trenton Erdmann-Hughes just missed out on a medal, finishing in 16th place with a time of 19:36. For their efforts, the boys came away with the team title!

“It was great to see five of our varsity boys earn a medal today,” Curran stated. “All of their hard work is beginning to pay off.” 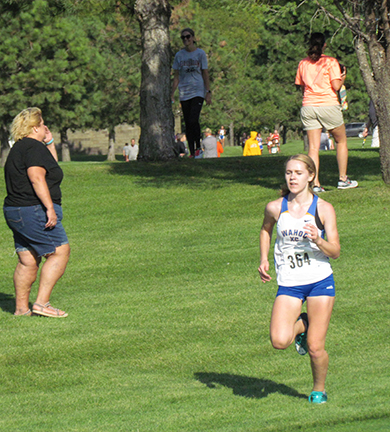 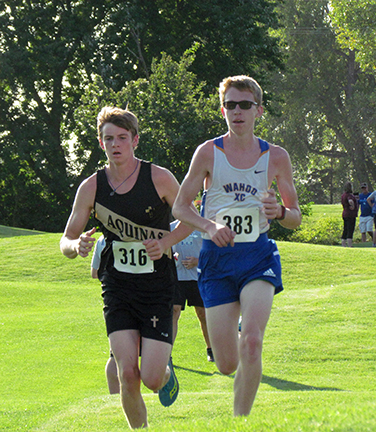 Cooler temps equaled faster times as the Wahoo Harriers took to the course at the North Bend Country Club on Thursday, September 26. Thirteen new personal bests were made as the athletes took advantage of some great weather and extraordinary competition.

Zoe Christenson continued to impress as she took control of the race about midway through, winning with a time of 20:30 for the 5k race.

“Zoe ran a smart race. She was patient, and sat back, waiting for the right time to make her move,” commented Coach Karla Curran. “When she decided to go, she never looked back.”

Megan Robinson also ran well for the Warriors, finishing with a new personal best of 23:25, and a 13th place finish. Hannah Jorgensen was the final girl to medal, placing 14th in the large school division, with a time of 23:28. Esmeralda Perez, Samantha Sutton, and Grace Darling rounded out the Warrior squad, with Sutton setting her own personal record of 26:15. For their efforts, the girls finished in 2nd place in the large school division.

For the boys’ squad, Grant Crockett once again led the way for the Warriors. Crockett placed first in the large school division, crossing the finish line in 17:34.

“The boys are beginning to round into shape,” said Curran. “We only had 21 seconds between our third through sixth boys. Now they just need to close the gap between them and Graber.”

Next up for the Warriors is the Lincoln Lutheran Cross Country Invite on Thursday, October 3, where they will compete at Pioneers Park. The girls are set to take off at 4:30 p.m., with the boys to follow at 5:00. 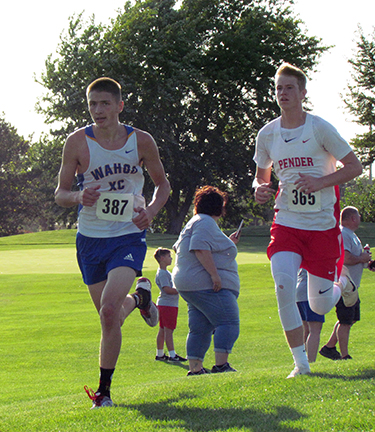 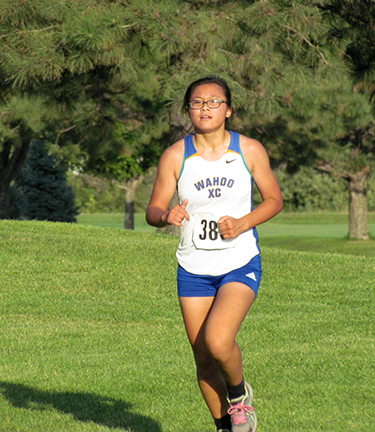 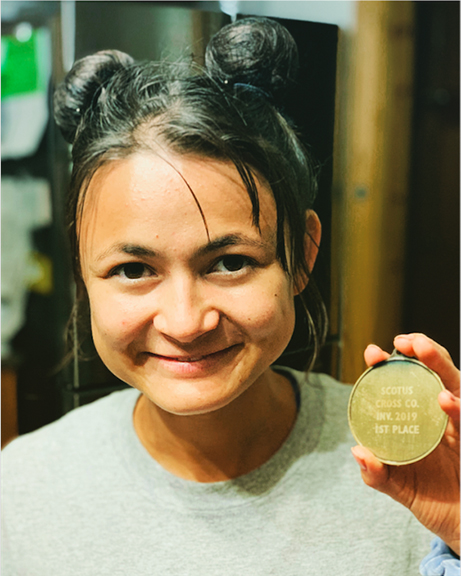 Warrior senior Zoe Christenson took the individual championship at the Sept. 19 Columbus Scotus Invitational, with a time of 21:12. 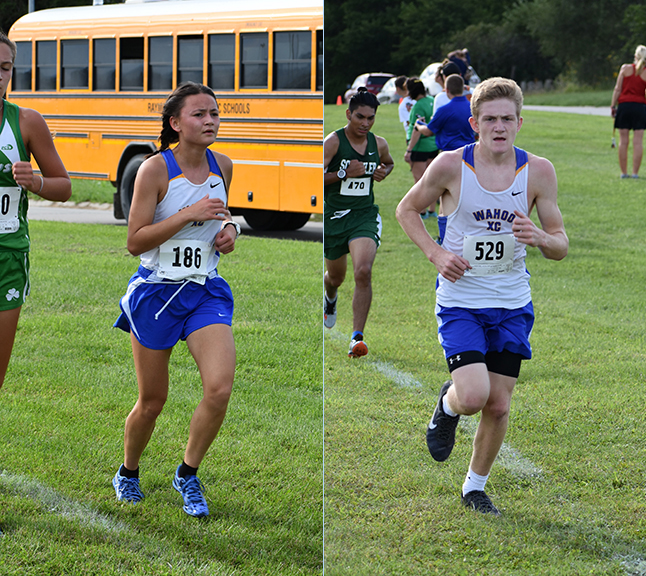 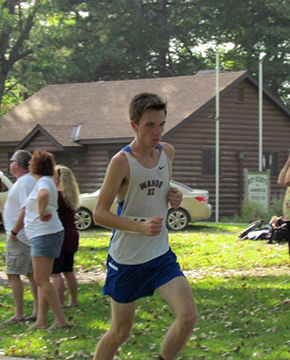 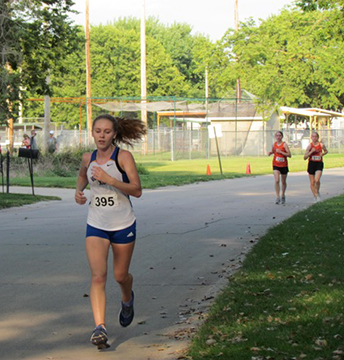 Hot and humid were two words that best described the racing conditions as the Wahoo Harriers opened their 2019 racing season. In spite of the less than favorable conditions, both teams performed remarkably well.

The gentlemen began the day with a second place team finish, and an overall champion in senior Grant Crockett. Crockett won the race easily, outdistancing the rest of the field by thirty-two seconds.

“Grant had a great day! He ran smart, and simply cruised to a victory,” commented Head Coach Karla Curran. “Next week he will definitely be challenged at our home invitational.”

“For our first meet, I thought the boys ran pretty well. We definitely will need to close the gap between our second and third runners, if we want to be successful in the big meets,” replied Curran.

As for the girls’ squad, they, too, placed second in the overall team standings. Senior Zoe Christenson emerged as the overall champion, after a tough battle from start to finish in the girls 5000-meter race.

“It was a battle from the start, but Zoe just hung in there and out-kicked the Schuyler girl for the win. I couldn’t be more proud of this young lady!” Curran commented. “She has worked very hard this summer, and her hard work is paying off!”

“We definitely have some work to do on the girls’ side, but it is early, and I am confident that these girls can get it done,” added Curran.

Next up for the Warriors is their own home invitational on Thursday, September 12. The first race is set to begin at 4:00 p.m. 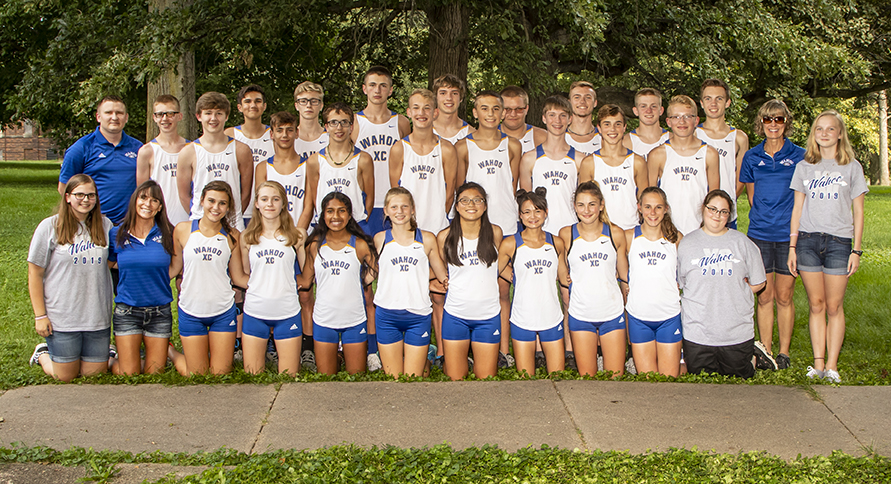 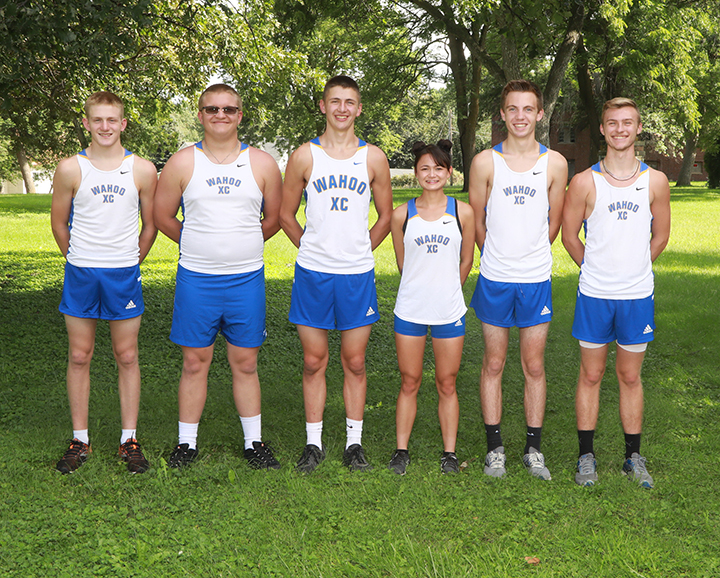 State Cross Country (October 23, 2015) A trip to Kearney was in store when both Wahoo teams headed west to compete against the best Class C runners in the state on October 23. The girls, despite their inexperience at the . . .

The Kearney Country Club was the place to be on Friday, October 23, as hundreds of athletes competed in the Nebraska State Cross Country Meet.   Three Wahoo Harriers earned a chance at running against the best in the state. . . . 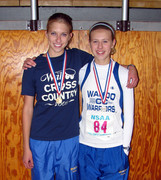 2008 Season Ends with Reason to Celebrate!

On Friday, October 24, at the State Cross Country Championships in Kearney, Erin Curran's dream finally came true. She won the Girls' Class C Cross Country title in a time of 15:16, out-distancing the field by 43 seconds.   . . . 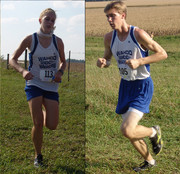 By now, the cross country spikes purchased at the beginning of the season are caked with the remnants of previous races and long-sleeved t-shirts become a necessity for Saturday morning long runs. The boys’ and girls’ cross country . . .