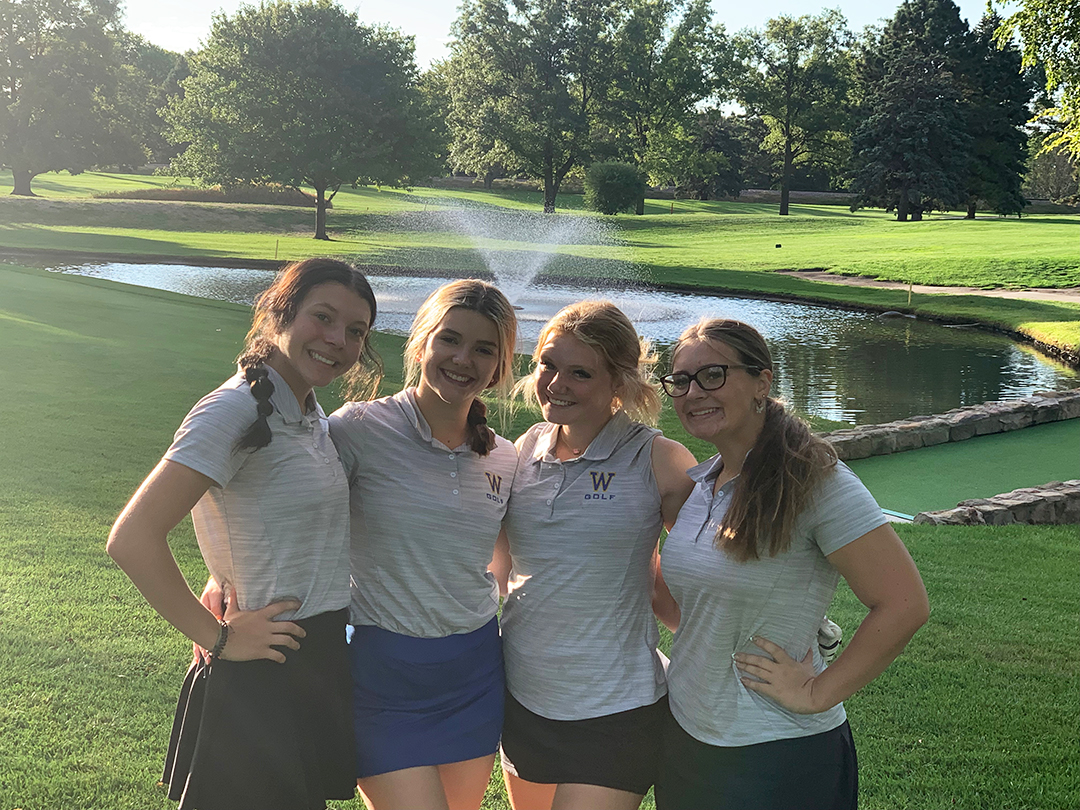 After about a week off, the Warriors returned to the course Tuesday on a sweltering day. With temperatures near 100 degrees, the girls also had to take on the always challenging Fremont Golf Club.

Senior Teegan Roberts was able to overcome the challenges to lead the way for the Warriors. Roberts, who was playing in just her second invite ever, shot a 118. Her round was good for 18th place overall.

“Teegan had a really solid day. She was able to avoid really big numbers and was just very consistent throughout her round,” said Coach Curtis Carlson.

“As a team he had a very up and down day,” added Carlson. “There were some great holes, like Erika carding a birdie on the par-4 9th hole (the next best score from anyone in the field was a bogey). There were also some holes that the girls would love to play again. I feel good that the girls continued to battle when they were not having their best rounds.”

The girls will have a week off before returning to Beatrice to participate in the Trailblazer Conference Tournament on Wednesday.

After a couple days of rest, the Warriors returned to the course Monday at the Blair Invitational, played at River Wilds Golf Club. The girls enjoyed a picture-perfect fall day with temperatures in the upper 70’s and very little wind.

Junior Samantha Norris was able to capitalize on the great conditions to shoot a P.R. score. Norris came out hot and shot a career best front nine score of 57. She was able to follow that up with a 65 to finish with a 122. The highlights of Norris’ round were bogeys on the par-3 4th and par-5 6th holes.

Sophomore Erika Maldonado was just two shots behind Norris, scoring back-to-back 62’s for a 124 total. Maldonado was able to bogey both par 3’s on the back nine.

“Due to a late injury and some sickness we didn’t have a full team today. The girls we had were able to capitalize on the great conditions. All three girls hit some really outstanding shots that you don’t expect to see from first year golfers,” said Coach Curtis Carlson. “Samantha had her best ball striking day of the year and her score showed. A neat thing is that we have had five different leading scores this fall. That is really unusual, but it all shows all the hard work each girl has put in.”

A day after competing on the challenging Hilltop Country Club, the Wahoo Girls Golf team was back in action on Thursday at Bay Hills Golf Club in Plattsmouth. The girls were tested by one of the hardest courses they will face all year.

Sophomore Erika Maldonado carded the best score for the Warriors. Maldonado started on the back nine and recorded a personal best nine hole score of 58. She was able to follow that up with a 61 for a P.R. round of 119. The highlight of Erika’s round was a par on the par-5 sixth hole. She also had two bogeys and six double bogeys during her round.

Playing in her first 18-hole tournament ever, senior Teegan Roberts had the next best score for the Warriors. Roberts started her round with a 72 and was able to shave off seven strokes on her second nine for a 137. Roberts was able to card a bogey and three double bogeys during her round.

Also scoring for the Warriors were senior Aspen Eckley and junior Samantha Norris. Both finished with a total score of 138. Eckley had five double bogeys during her round, and Norris had one bogey and three double bogeys on the day.

“Today the girls were challenged by a very difficult course and they did a really good job of responding to the challenge. The girls are really motivated to improve and have very high expectations. Erika carding a 119 when she just started playing this summer is amazing. The fun part is that when we talked about her round she could name multiple places that she could cut her score down. Any time you play a course like Bay Hills and P.R. you had a really good day,” commented Coach Curtis Carlson. 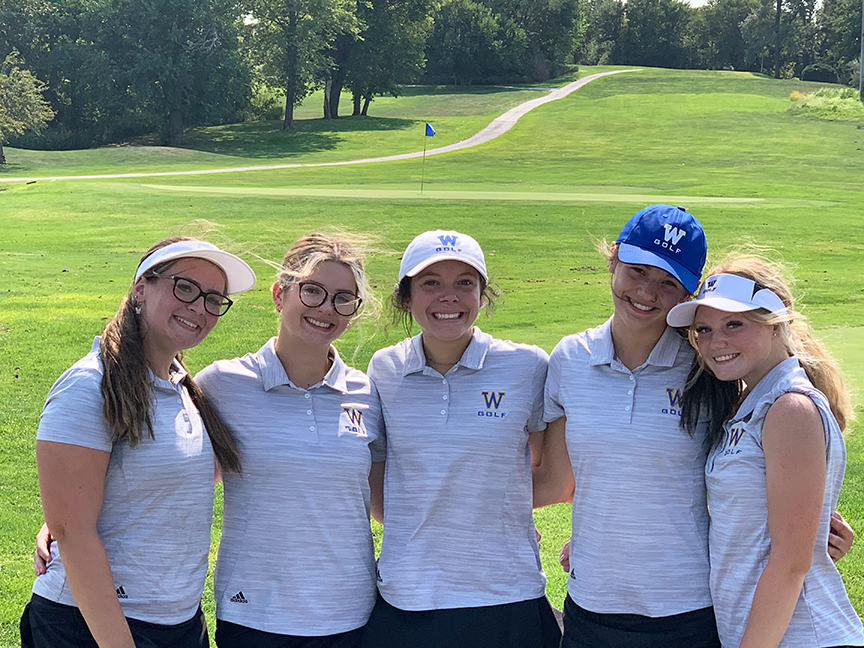 On Wednesday the Warriors returned to the links to host a quad with Blair, Elkhorn North, and Plattsmouth. The girls were greeted by a warm, but beautiful afternoon at Hilltop Country Club.

Following Raney was senior Teegan Roberts who, playing in her first event of the season, recorded a 64. Roberts was able to bogey the par-4 second hole to help her score.

Junior Samantha Norris and freshman Alexis Jonas both carded 67’s. Norris was able to capitalize on a par on the par-3 6th hole.

The individual medalist was Julia Karmazin from Elkhorn North with 38. Elkhorn North also took home the team title with a very impressive 176.

“For a young team there were lots of highlights today,” said Coach Curtis Carlson. “Karina cut eight shots off her P.R. and broke 60 for the first time, which is a big accomplishment for a first-year golfer. Samantha making a par was great as well. There were some ups and downs today, but overall there has been a huge amount of growth from the start of the season.”

After a week off the Warriors returned to the links Tuesday at the Fremont Golf Club. The Warriors took on squads from Fremont Bergan, Arlington, and Fremont High JV. On a warm, beautiful day the girls were challenged by tight fairways and slick greens.

Leading the way for the Warriors was senior Aspen Eckley with a 59.  Her round was highlighted by a bogey and 4 double bogeys.

A shot behind Eckley was sophomore Erika Maldonado. During Maldonado’s round she had 2 bogeys and a double bogey.

“Today was a good learning experience for the girls. The Fremont Golf Club is always a challenge as the greens are fast and there is a lot of trouble around the course. Aspen was able to avoid trouble except for a couple holes and had a really good day. Erika also had a really good day carding bogeys on a couple really challenging holes. All the girls hit some really good shots, but when you play a course like Fremont any bad shot lead to multiple extra shots on your scorecard,” said Coach Curtis Carlson.

The Warriors will be back on the course on Wednesday at the Wahoo Quadrangular played at Hilltop Country Club.

Just one day after starting the season at Schuyler, the Warriors were back in action Tuesday at the Beatrice Invitational. Even though this was the first time any of the girls had played 18 holes competitively, they were excited for the challenge. The experience from Monday paid off as the girls were much more comfortable on the challenging Beatrice Country Club.

“Karina cut 12 and 15 strokes off her rounds from yesterday," commented Coach Curtis Carlson. "She hit a lot of great shots today that will be a building block for her going forward.”

Just three shots behind Raney was junior Samantha Norris. Norris finished her day with a 136 (72-64). On the par 3 fifth hole Norris shot her first-ever par. She also had bogeys on three of the par 4 holes.

“Samantha hit some great shots today. The first time recording a par is a big accomplishment for a first year golfer,” Carlson said.

Another Warrior recording her first-ever par was Sophomore Erika Maldonado.  Maldonado had a par on the par 4 thirteenth hole.  After hitting two good shots, Erika hit her third shot over the creek to about 2 feet for a tap in par.  For the day, Maldonado finished with a 144 (73-69).

Also scoring for the Warriors was senior Aspen Eckley with a 154 (77-77). Aspen’s round was highlighted by a bogey on the par 3 15th hole.

“For all four girls, today was a much better day," Carlson stated. "They all commented how they were able to relax and have fun today after being nervous about yesterday. It is amazing to see how much growth the girls have made from the start of the summer to today.”

The Warriors will return to action next Tuesday, August 29 at the Fremont Golf Club.

After 4 years of not having a team, the Wahoo Warriors returned to the course on Monday at the Schuyler Country Club. The girls were tested by the small, turtle back greens that made chipping and putting incredibly challenging. The girls also had to battle nerves as this was the first time any had ever played competitively.

Leading the way for the Warriors was freshman Kenzie Koranda with a 66. Her round was highlighted by double bogeys on both of the par 3 holes. Other scores were sophomore Karina Raney (80), freshman Hannah Girmus (81), junior Samantha Norris (82), senior Aspen Eckley (84), sophomore Erika Maldonado (87), and freshman Alexis Jonas (96).

“Even though the girls were disappointed with the results, they were able to walk away with valuable experience," commented Coach Curtis Carlson. "There were a lot of shots that were hit really well that just ended up catching a bad break around the greens. Being the first time they ever played competitively, I know that the girls will learn from today and that will positively impact the rest of the season.” 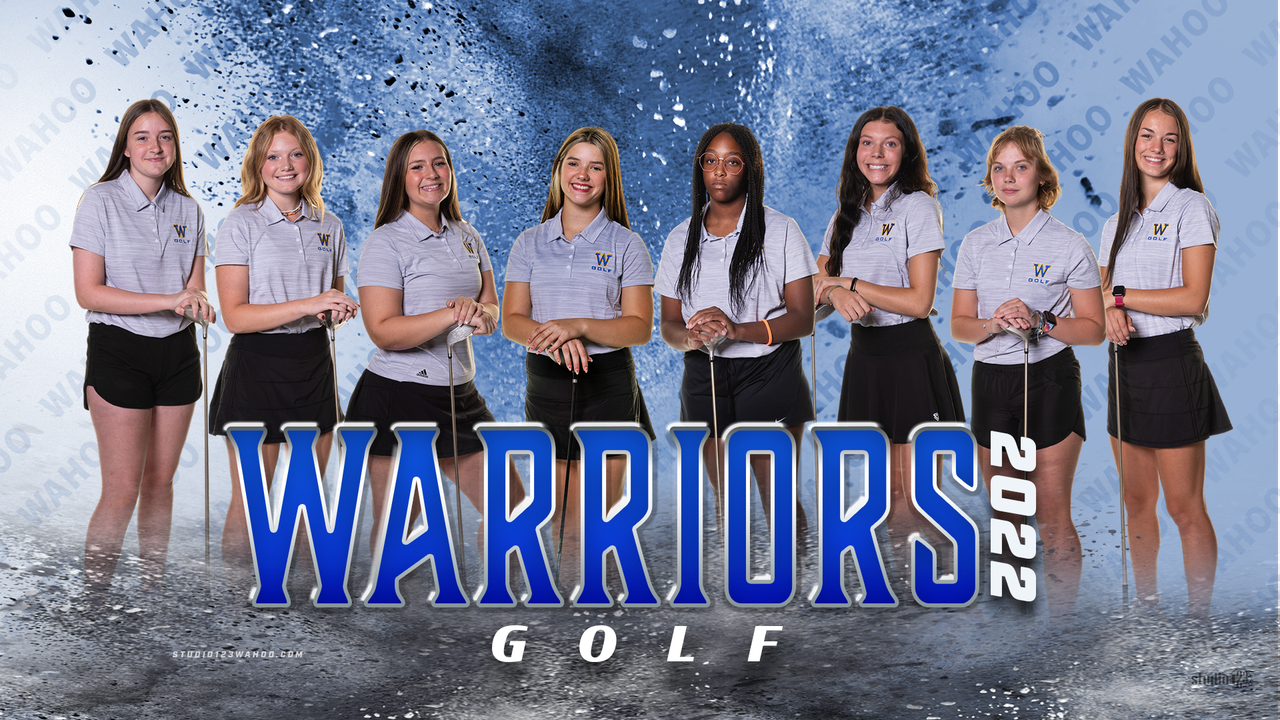