WMS 8th grader Cash Brigham's talents are "above and beyond"

WAHOO – Paintings of planets on display in a gallery in downtown Wahoo caught Wahoo Elementary Principal Ben Kreifels’ eye this summer. Even before he knew who painted them, he knew he wanted to use them to highlight the theme for the 2022-23 school year, “Above and Beyond.”

Then he learned the artist was Cash Brigham, a former student who is now an eighth grader at Wahoo Middle School. Cash is the son of Melissa and Greg Brigham of Wahoo.

Each year, the teachers pool money to purchase special items for the school that are outside of their budget allocation. Kreifels felt this money would be put to good use to buy two of Cash’s paintings. The rest of the teachers agreed and the paintings were procured from Angie Craft, owner of Sassafras Galleria, where the artwork was displayed.

Each school year, Kreifels picks a theme for the school year. When he saw Cash’s paintings, he felt the young artist’s work perfectly captures the school culture of going above and beyond for each other and the community and will help motivate students to grow into the best version of themselves, the principal said.

Craft was so captivated with the paintings and with Cash that she decided to donate another one of his paintings to the school.

“I think it's special that it’s his painting and he went to school here,” she said.

Craft recognized Cash’s talent when his grandmother, Gayle Rasmussen, showed her one of the paintings and asked if she’d be interested in selling them at her store.

“I was very impressed,” Craft said.

Craft had worked as a substitute paraprofessional at the school when Cash was a student, so she knew him. But she wasn’t aware of his talent.

“I didn’t realize Cash was artistic at all,” she said.

Craft is a champion of young artists and has art from five other fledgling painters and drawers for sale in her gallery. But Cash’s art stands out from the rest of the youthful artists.

“His art is very different from any other art I have in there,” Craft said.

Cash has been passionate about art since as long as he can remember. He recalls doing a drawing of the Marvel character Venom that drew rave reviews from family, friends and teachers.

“I’ve been told that I’m pretty good at drawing,” he said.

Artistic ability runs in the family. Cash’s mom is a crafter who creates signs and other items. The pair shared an upstairs room/turned art studio for a while, but Melissa recently moved her craft supplies downstairs.

Cash earned awards for his art while in elementary school. He started to experiment with other forms of media, including painting.

On social media this summer he saw a video of someone painting a planet using spray paint. He thought the concept was interesting and decided to try it.

“The first couple of times it didn’t really turn out,” he said.

Cash didn’t give up. Using round bowls for outlines, he continued to layer spray paint onto canvas, and soon he had something he was proud of – a painting of a planet with a three-dimensional effect.

The examples of paintings Cash saw just had one planet per canvas, but Cash wasn’t content with that.

“I just took it extra and did a ton of planets on a big (canvas),” he said.

The effect was his own version of a galaxy of planets. He continued to create more paintings, and soon had enough that his grandma thought he should sell them.

He tried to use social media to sell his paintings, but that didn’t work. That’s when Rasmussen conferred with Craft and a deal was struck. Craft charges a 10% commission from the sale of her young artists’ work.

Cash will use his earnings to buy more paint supplies and possibly some Lego sets, one of his hobbies.

He will continue to make galaxy artwork, but will likely add even more types of art to his resume. He plans to continue art classes in middle school and high school.

It’s a little too early to decide what he wants to be when he grows up, but Cash said playing professional baseball is his first choice.

“One option would be art,” he added.

Cash’s younger brother, Breckin, is a fourth grader at Wahoo Elementary School, so Cash will see his paintings once in a while when he attends his brother’s events there.

The paintings are displayed right by the front door to catch the eye of everyone who walks in the building.

Suzi Nelson is the managing editor of the Wahoo Newspaper. Reach her via email at suzi.nelson@wahoonewspaper.com. Click HERE to access the original article, posted 08/17/22. 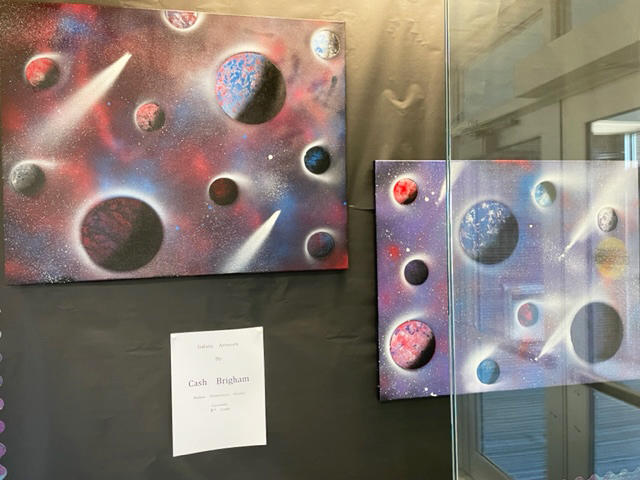